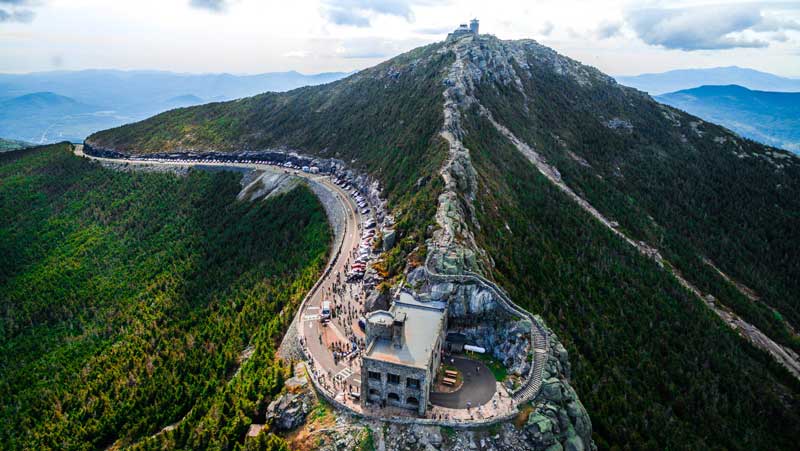 Wilmington, NY – A single Chimp made his annual pilgrimage to the High Peaks of the Adirondacks. Patrick McNeil added another completed summit to his list and improved his overall time over last year. The Whiteface Mountain Uphill Bike Race had its largest turnout in many years.

Last year was rough, I had bike problems, back problems, and the weather was just awful. This year I set my goal to beat my time from last year, and start an upward trend.

The weather held and racers were treated to a balmy start with the occasional breeze to keep things cool. As the race kicked off, McNeil found himself back a bit farther in the pack than in past years.

I didn’t stress about lining up near the front or hammering the opening stretch in to the base of the mountain. In years past I’ve always tried to be aggressive on the run-in but this year I just let it flow. It turns out I set a PR going into the mountain!

Spectators lined the opening miles of the course and at the turn McNeil settled in for the long mountain climb. At 8% average grade, the slope of the road up Whiteface Mountain isn’t overly steep— its challenge lies in its relentless consistency and 8 mile length.

Every year I tell myself ‘you started too hard, you chased too many wheels’, so this year I made an extra effort to set the pace I knew I could sustain for the entire climb and ignore anyone flying by me. It always feels too easy, but it’s tougher after 60 minutes. I was back a bit farther in the stream of racers than I’d like but I like to have targets in front of me for this race.

A trap that’s easy to fall into when you’re feeling fresh is trying to stay with someone who is just a too fast for you. There’s a fine line between finding that wheel that’s just a little faster than me— what I prefer— and burying myself hanging on to one thats a little bit more than that. If I detected this happening, I just let the wheel go and got back to my pace.

By the time we reached the toll booths I was feeling pretty good. I was passing a lot of riders, and not being passed by many. The sheer number of riders I was spinning by was a great mental boost.

By about halfway, we had spread out into small groups and so began the game of trying to tell if I was gaining on the group in front of me— and if I was— was I gaining too fast for my legs to sustain— and if I wasn’t— were they just too fast or could I pick it up? A lot of mental stuff going on.

By the end of the climb I felt like I had enough left in the tank so I started trying to pick up places after the hairpin up top. By the end I had shifted into the big ring (to look cool) and picked off a few more people on the final stretch into the finish line.

When I crossed the line I was flung a medal over my neck and was confused, had I won something? It turns out they had finisher medals made up this year, and they’re seriously awesome pieces!

I set a better overall time than last year, and a better time up the mountain, by several minutes. I set new 20, 30, 45 and 60 minute power levels for this year. I wasn’t completely out of gas by the end, which gives me some improvement to look forward to next year.

The Whiteface Mountain uphill bike race is one of my favorite events of the year, and this time was no different. It’s a simple premise— ride a bike up a single mountain as fast as you can.