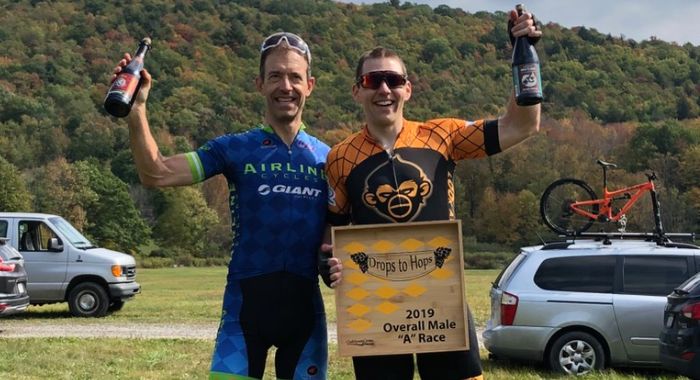 Drops 2 Hops is a 42 mile race with 3,215 ft of climbing featuring. It features two distict climbs: a 1.73 mile climb at 8%, followed by 1.84 miles at 4%. Both climbs are deceptive in that their gradient is far from consistent, featuring a few false flats punctuated by short, steep rises. The second climb is noticeably more punchy. The final climb is followed by a sharp descent, before a drag race into the finish which almost always features a head wind.

Having peaked in early August, I had fitness, but not a lot of form. I knew would get dropped if things got punchy. My strategy was to diesel the first climb, play catch-up on the descents, and try to catch anyone up the road in the last 10 miles. At the start the race director announced that the descents were recently stoned so we should use caution… great! *sarcasm*

The road with the second climb more recently had work done, so they adjusted the route to take a different road over the same hill that is a little more steep and even more punchy… even better! *more sarcasm*

The first 24.5 miles was one of the best group rides I’ve ever been on. Without a lot of team representation, everyone was more-or-less content leaving the race as a hill climb. This became overly evident when the race favorite commented to me about how nice the weather was, which precipitated a splendid conversation about the fall foliage…

We hit the first climb. An unknown rider went off like a rocket. I did not respond. Surprisingly, neither did anyone else.

I settled into my pace, riding on feel. The race favorite was on my wheel. We caught the rocket and dropped the rest. The other rider said he was not feeling the best. Towards the top of the climb I asked if he was okay. He replied by saying, “It’s just not my day.”

We hit the descent and the second climb. I was waiting for him to attack me at anytime, but the attach never came. After the second climb he said, “just go,” and it became apparent he was about to blow. I replied farewell and soon I was clear, as I rode solo 10 miles to be first to the beer.