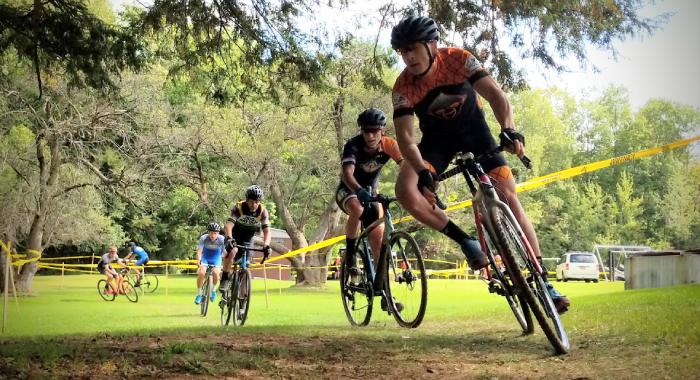 Kirkland, NY — The second race of the CNY Cyclocross cup and the 2019 New York State Cyclocross championships, a fast course and faster competition awaited Ken Hammond, Patrick McNeil, Jon Cyganik, Scott Stewart, and Ben Rabin as they lined up to the start their respective races at Kirkland town park. Slick grass, a few apples, and a bit of mud made for an amazing cyclocross race, ending with the team securing two 1st place podium spots and one NYS champion’s jersey.

Cyganick finished the CAT 5 race in 1st place, and Stewart would later that day climb to the top step of the podium and claim the NYS Cyclocross Champion’s Jersey for the Masters 35+ category.

Lesson learned from the Rochester race… warm up for more than ten minutes before the start. I met with Jon, Pat, and Ken to talk about the course. I rode a lap and a half of recon and it was similar to years past so I had a good idea what to expect.

At the start I exploded from the second row up to 5th by the end of the pavement going into the first corner, then sprinted up to 3rd on the front straight into the fist chicane. Not much happened until about halfway thru the first lap, got passed by Davall and some other dude. For the rest of the lap I could hear two more guys behind me pushing hard.

Start of second lap, Jaco passed me. The other guy was from Pete’s Wheels, he stayed on my wheel for the entire lap. Next lap he passed me and I hung on his wheel for lap three, when he opened a little gap. I was able to close the gap on the stair run-up on lap four.

The whole time I was thinking he was in my field, so I was planning out my move. He started to slow down after the steps, so I felt he was getting gassed. I waited until the final lap to make my attack, after the barriers. Was able to stretch the gap, but he started to claw it back. I put in a huge effort on the backside, opened a big gap and held it to the stairs. Blew the heart rate thru the roof, but kept the hammer down and held on.