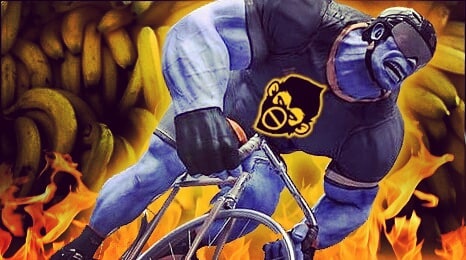 Trumansburg… It’s a 7 corner crit in a Tompkin’s County town with a NYS Championship on the line… I “C” the appeal. Pre-riding the course, a friend who raced it last year gives me some tips.

“It’s technical. Basically a cyclocross course. Last year, Phil did a CX start and most were out the back in the first lap. You want to start at the front and be ready to go hard from the gun.”

We finish out lap. We are the last to arrive, stuck at the back of the pack. And there is Phil at the front…

…Fudge*…This is going to hurt

The race started as expected. Phil ripped it, got to the front and strung out the entire field with huge gaps after the first turn and me at the very back.

My only means of recourse: Pedal hard. Pass people. Break Hard. Turn. Repeat. Crush the 7th turn into the hill…

Almost the entire course has a slight downhill gradient until the 7th corner; a hard off-camber right turn into the hill which leads to a false flat through the finish and back to the first turn.

I made it to the front to form a breakaway group of 3. Mid way through the second lap another rider bridged to make it 4. As we finished lap 2 we had a 15 second time gap. Considering that bridgable, I hit the front and ramped it up. How much did I ramp it up?

Going into the dreaded corner 7 I leaned hard. So hard I heard the RIPPING sound of my tire losing traction as my bike skidded towards the outside. I sit up to straighten it out. I save it and… Oh look! The race organizer’s highlighted this curb that seems to stick out into the road… I am looking at it and going where I am looking…

Turning my head right I look up the hill.

My rear tire hits the curb, but comes down straight and I save it. Just in time to start the climb with zero momentum. After another rider confirms that my tire is not flat, but my wheel is slightly out of true, we soldier on. I get back to the front, hammer the false flat, hit some gravel AND…

…things got squirrely, but I saved it, and we now had a 30 second gap. My thought: After that display, maybe the other 3 will just let me sit at the back the rest of the race.

Nothing else really happened. One rider got a mechanical reducing out group to 3. One rider, Phil, seemed to be skipping pulls, which concerned me. Since I was the worst at taking the 7th turn, I knew I had to go early.

I noticed Phil was taking the 7th turn well, then settling into an easy pace, spinning up the hill. So, with 3 laps to go I put myself between Phil and the other rider. I gave Phill a gap into the 7th turn. I used the gap I created as a sprinter’s gap to accelerate by him. The other rider behind me tried to keep with me, but was unsuccessful, probably because he had to slow down into the bottom of the hill and followed my line. I had about a 5 second gap with 2 laps to go. Smashed the hill into the final lap. And smashed it one more time into the finish just 12 seconds ahead to become the New York State CAT 3 Champion.

The 1/2/3 race went much the same. I started at the back. The front strung it out. I just paced it and managed to claw my way back up to the front group. The pace was insane for the first 4 laps, then we just played tiddly winks for the rest of the race. My goal was just to survive and work on cornering without trying to corner beyond my abilities. Gased from the first race, I didn’t have any POP left to make big moves. All I could do was just diesel on and keep the group from spliting.

I was 8th going into the bottom of the climb on the last lap. Taking the turn poorly I was about 20-30 feet off the back. I stood up, put my head down, and pushed out every last thing I had. In the end, I managed to clip 2 riders and come in right on the tail of another to take 6th place.

The course was fast and fun, but I really cannot say enough about the venue. The speculators and cow bells on every corner really helped to make the race.