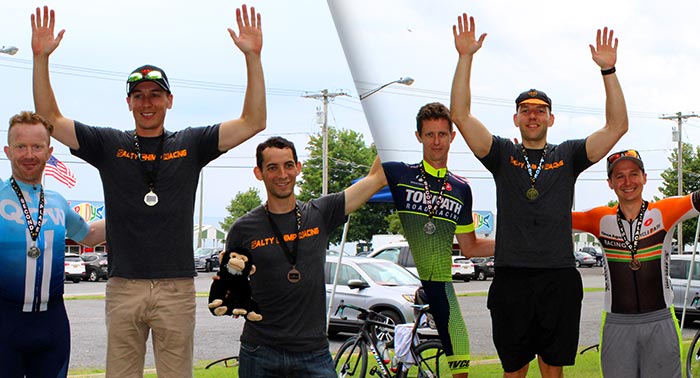 Oswego, NY— The team had another strong turnout to Ride Oswego County’s premier road race, Tour de Loop. The final event in the Oswego County Race Series, Tour de Loop rolls out from Rudy’s in Oswego and continues over a sawtooth profile course for 50 miles.

Scott Stewart, Jon Cyganik, Fred Bulken, Dave Tate, Rob Chimento, Patrick McNeil, Dan Deemer, Pat Doner, and Ben Rabin entered the CAT 4 race, which started blisteringly fast. Echoing the combined 1/2/3/4 race from last year, the speed ramped up from the very moment the pace car pulled away. The pace was so high that nearly half the field was dropped within the first lap.

It was the kind of pace and course profile where, if you lose the draft, you’re in immediate danger of being dropped. You have to get back right now or you’re done. Do it a few times— or at the wrong time— and the constant punchy hills will make sure you get dropped very quickly.

By the last steep climb on the first lap, the field was whittled down to about 8 or 9 riders including Stewart, Cyganik, Tate and Bulken. Fred put in a calculated attack to put more stress on the field.

I attacked at the top of the hill and opened up a gap. A Placid Planet rider came across and we exchanged a few pulls before the pack led by [Jamie] Hoyt caught us just before lap two began. At that point Scott said it was just the two of us. I couldn’t believe Jon and Dave got dropped. I thought I must be having an epic day to have dropped those two! Only at the finish did I realize what happened.

Unknown to Fred and Scott at the time, the pair had dropped back due to a mechanical issue which Cyganik suffered as Bulken attacked.

My chain dropped to the outside as Fred went. I genuinely thought my race was done when I had to pull over. Dave dropped back like Angels in the Outfield and we hammered hard to get back to the main group. To be safe, I didn’t shift back into my small ring for the rest of the race!

Once Tate had delivered his teammate back to the pack, Cyganik had enough time to sit in and recover a bit before attacking on the hill leading up to feed zone (where he had dropped his chain the lap before). Stewart and three others jumped on his wheel and the five of them were off, dropping Bulken and Tate.

The race came down to a sprint finish between the five leaders, resulting in Stewart and Cyganik taking 1st and 3rd place, respectively. Stewart took enough points to defend his title of CAT 4 “King of Oswego County” for the Ride Oswego County race series.

I’m really happy with how we adapted as we went, we’re getting better at understanding the race. There was a lot of well placed attacks. We needed our heavy artillery today to get it done.

With the rest of the team racing category 4, Josh Graves entered the category 1/2/3 race. His first road race in over a year, Graves was outnumbered.

The race started slow. It would seem that everyone did their homework. In the field we had a local pro, the CAT 1 NYS Road Race Champion, a strong team of three, and a handful of strong dudes.

The move that made the break came around mile 13. A rider rolled up through the group on the Sterling climb, then attacked over the top while everyone else was still on the hill. The onslaught continued through Juniper Hills. Once the break was established, the group of 5 riders caught the rider who went off the front, and then continued to extend the gap.

Once out-of-sight, the break settled into a pace line. I would roll off the front on the descents, sag climb the next roller, and repeat, working in the pace line when not on a clear hill. I pushed it over the top of a few climbs to try to soften the group.

After the 2nd lap, it is a fairly flat 2 miles to the finish. A rider attacked into the final bend to the finishing straight. I jumped on his wheel into the turn. From there it was a 500 meter drag race to the finish. I took a quick check around me. There was a rider on my right, but he started to drop back. I launched. Head down. Eyes up. Drive, drive, drive, drive! Cross the line… I don’t see a rider in front of me. A few moments later the rider who launched the final move congratulated me on the win.

Graves claimed enough points to secure the title of CAT 1/2/3 “King of Oswego County”. The team looks forward to defending their titles next year, and looks back on another amazing season of road and gravel racing in Oswego county.