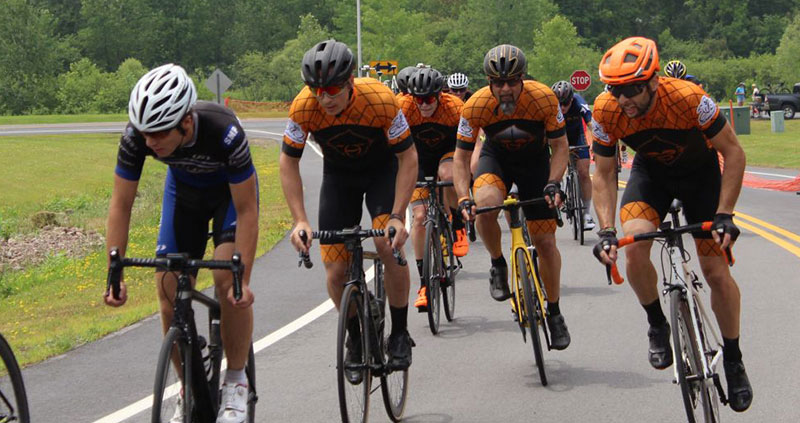 Minetto, NY — A favorite annual race for the team, turnout was high for this years Seneca Circuit Race. Heavy rains early on during the day and part way through racing added a spring-classics feel to the road, without the near freezing temperatures! Ben Rabin, Fred Bulken, Scott Stewart, Tony Campagna, Pat McNeil, Dan Deemer, and Rob Chimento represented the Team in the Cat 4 race. Josh Graves entered the following Cat 3 race, while Toby Heath raced the Master’s 35+ category at the same time.

The Cat 4 race started slowly, with competitors feeling out the field, but it wasn’t long before the pace began cranking up.

I had no idea what to expect since I’ve had a ton of time off the bike. First couple of laps were slow… Then Rob got started slamming the hill. The pace picked up and I found myself near the front covering attacks.

Despite the wet conditions, the race went on safely. Even so, the team tried to keep a strong presence at the front of the pack to stay out of trouble and control as much as possible.

I sat in the pack and watched with confidence that any and all moves would be taken care of. When it wasn’t another team attacking, a chimp was off the front ensuring that other teams burned matches.

The team’s early plan was to launch Stewart or Campagna to victory on the final lap. Rival Ben White (Once Again Racing) made sure that would be difficult.

On the final lap, I was sitting 3rd wheel when Ben White accelerated. Rabin and I chased, towing the rest of the pack with us. As Rabin pulled off I put in a hard but unsuccessful effort to close the gap.

The Cat 4 race came down to a close finish, with Stewart placing just one second behind White in a photo finish for 3rd place.

In the P123 and Master’s race, Heath and Graves had their work cut out for them.

I wanted to sit in, practice pack riding, and make a late attack. I knew there were a couple strong sprinters in the field and a couple strong teams. A group of three attacked from the gun and another strong guy bridged up (Jake Castor), so I had to go too. I tried to make the break work, but we were caught.

I ended up dangling off the front for a bit, so I thought I would try to go solo to draw out some riders. Half a lap later, just after the hill, the group was close behind and Castor tried to bridge up. Last year Jake rode my wheel and clipped me at the finish. This year he also had two teammates in the field. I did not want him on my wheel.

I managed to shake him and get away on the descent, extending my lead. After the next hill, another rider bridged to me just before the descent (Jake’s Teammate from Once Again). I looked back at him. He seemed a little gassed. So I accelerated into the turn and punched the climb to shake him off. From there I paced myself to stay away.

“Stay away” is the understatement of the season, as Graves continued on to lap the field and go off the front yet again to take 1st place in his category.

Fighting for points for the podium of the category 35+ of the Oswego County Race Series, Heath had quite the act to keep up with the pack chasing Graves, in a combined field.

My goal was to sit in the pack and hold on as long as I could while keeping my eye on Justin Frontunto (Series Points Leader). Take it easy once I crested the hill, regroup on the downhill, and then punch the main hill back to the start. A couple of times the pack broke up and I would see Justin fall back. I made the wrong assumption that he fell off the back. But one or two laps later he would pop back into the main pack.

By lap 15 or so, I was smoothing out the course, needing less of a punch to get over the hill. It worked well until the main pack decided to kick it up another notch or two with three laps to go… I almost caught the last wheel going over the hill but couldn’t grab it— I was maxed out. I continued to chase but couldn’t make the gap… they were only 20 feet or so away.

It was all good fun, but I really wanted to beat Justin for the series standing! After the race ended, my teammates told me that he also dropped off on the last lap to finish behind the main pack. Next year, I’ll hold on longer!!